Ross Griffin, originally of Tularosa but now living in Corona, rode the Andrews Rodeo Co. horse Hissy Fit for 87 points for the win and a check for $2876.

It was a ride that challenged him. “When the horse turned out (of the chute), he was really jumping and had a lot of timing to him. He came around tight at the end, which added a little difficulty, and I was able to keep going, keep swinging my feet, so it worked out pretty good.”

The 24-year-old has done well lately. A few weeks ago, he won the Eagle, Colo., rodeo, and this week, he’s won checks at Dalhart, Texas and Sidney, Iowa (second place at both rodeos) and a third-place check at Lovington, N.M.

Lady Luck can swing both ways for rodeo cowboys, and he’s happy she’s smiling at him, at least for now.

“It’s a roller coaster, that’s for sure,” he said. “When it’s not going good, it’s really hard to turn it around, just because you get a bad attitude and it’s not working. You’re spending a bunch of money trying, and you’re trying too hard, and then it really doesn’t work then.

“The lows are hard to come out of, so you have to ride the highs as long as they last.”

A graduate of Western Texas College in Snyder, Texas, Griffin rodeos as much as he can while working for the family business. He’s the fourth generation of the family to be stone masons, covering house exteriors with rock, building fireplaces and retaining walls, and other jobs. He also starts colts and cowboys at local ranches.

With rodeo, his work schedule needs to be flexible. He’s contracted to lay some stone this month, thinking he’d have a few more days off than he did. “I really don’t have time (to do the job) but I gave (the customer) my word, so I’ll get my whole family together and we’re going to knock it out in the next couple of days.”

Griffin is engaged to be married to Saige Bell in October.

Tutor was thankful just to be on the rodeo trail, after the pandemic last year caused about half of the pro rodeos to be canceled.

“You know what, I’m grateful to even be having a year,” he said. “It’s going good. It’s steady.” Ranked 22nd in the PRCA world standings, he’d like to be in the top fifteen who go on to the Wrangler National Finals Rodeo in December.

“There’s plenty of rodeo left, and plenty of big rodeos to go to. No matter the outcome, we’re just thankful for those.”

It’s been a different rodeo year for Brown, a six-time Wrangler NFR qualifier.

His wife, Nicole, and their eighteen-month-old son, Wacy Paul, have traveled with him since early July, and they’ve made more stops, for their son.

“They always say you ain’t living till you have kids, and I think they’re right. It’s pretty awesome.”

During the rodeo, a big check was presented to the Elsie Brooks Memorial Cancer Fund in the amount of $4,703.50. The monies were raised through donations by rodeo fans and personnel, and go to help those fighting cancer in Dickinson County. 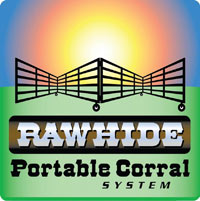